Bhakti means love of God or, as Srila Prabhupada would often translate the word, pure devotional service to God. (The Sanskrit root of the word bhakti is bhaj, which means “loving service.”) Bhakti is the essence of the eternal relationship we souls have with Krishna.

Art can contain more than human elements; under certain conditions a work of art can serve as a vehicle for higher, transcendental forces, whose impact on the viewer or hearer (in the case of music, drama, or poetry) doesn’t depend on intellectual grasp or cultural relevance. The mere act of seeing or hearing spiritual art produces a spiritually uplifting effect. Spiritual art is like fire: potent, able to act on anyone who comes near it.

Who is behind Bhakti Seva Art?

My name is Veronica Rosario, although in spiritual circles, friends–or as I call them, my spiritual family–know me as Vishnupriya Devi Dasi. You can read a little bit more in the About submenus. 😉 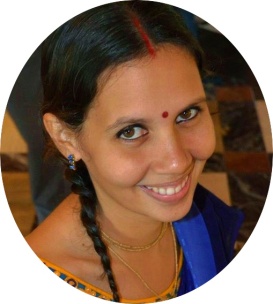